The other day, I started a multi-part post regarding height and its relationship to the League with an exploritory look into the changes in height over time with the ultimate goal of answering: How much is it worth to be tall?

While I won't hit that just yet, I will quickly run through the basketball contribution differences with regards to height.

I only looked at PER, Win Shares, and Defensive Rating as those are common metrics to compare players, and despite their individual weaknesses 1, they are readily available and cover a wide spectrum of a player's ability. 2

Note: The plots in this article may exclude some outliers in the hopes of making these plots more consumable and excluded seasons are due to a lack of data.

Taking a look at last season, here are the stat distributions: 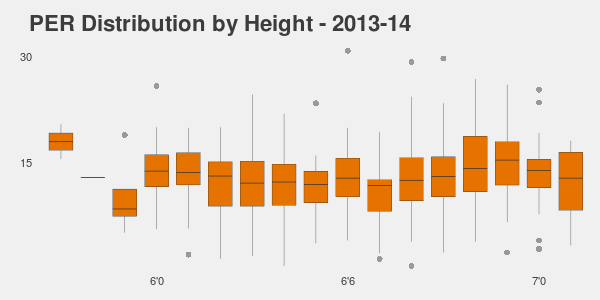 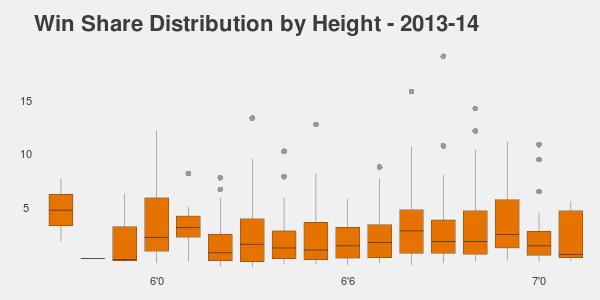 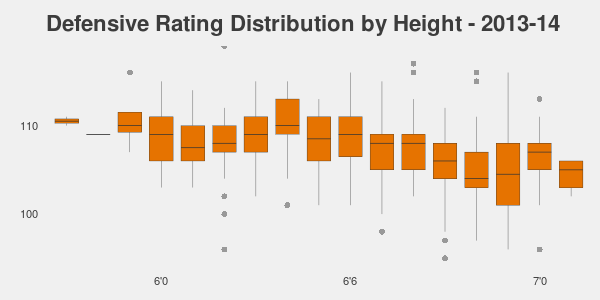 From a high level, we can take a look at the the distribution of these stats by height over time:

To be able to identify larger patterns, I spent a little too much time trying to bin this data in a meaningful way, but the most reasonable thing I could come up with was just binning by position (and indirectly by height 3), which mostly has the same patterns as the above distributions by height:

While none of these plots directly states the impact by position, it does give a general trend at the value of various positions over time. Most of these trends follow our general understanding of the league (e.g. Jordan and the Bulls winning championships in the bigman-lacking 90s), but also indicate some things we've come to understand from advanced analytics (e.g. there aren't many good shooting guards or wing players in general- or that they're replaceable). While we can continue to question the merit of each of these metrics, one thing that appears true is that taller players have generally contributed more on the basketball court than their shorter counterparts.

In my next post, I'll finally be getting around to determine how much its worth to be tall.