After submitting an entry to the 2021 Big Data Bowl in which I evaluated new Next Gen Stats for pass defense (honorable mention! again…), I decided to play around with an entirely different idea. This work was inspired by the 2020 Big Data Bowl winning solution which used Convolutional Neural Networks (CNN) to predict expected rush yards at the time of handoff.

My objective was to build a CNN model using NFL tracking data to predict expected pass play outcomes at every frame of a play (i.e. every tenth of a second).

Not only would it be fun to see how the expected pass outcome changes in real-time as plays develop (analytics broadcast anyone!?) - I have an even cooler application that I'll share soon!

In the example below we can see how various outcomes (i.e. EPA, Success Rate, TD Probability) change in real-time as the play progresses.

In this particular example, a perfect Patrick Mahomes throw turns a negative expectation play (at time of throw) into an 89-yard touchdown. After the receiver catches the throw in stride and the defender falls down, the TD probability jumps from near zero to almost certain in a matter of a few tenths of a second.

Below is an actual video of the play:

If you don't care about nitty gritty model details, skip down to see more sample plays.

To train the CNN models I used the 2021 Big Data Bowl dataset which includes NFL tracking data across all 19,239 pass plays from the 2018 regular season. With the typical passing play lasting ~5.5 seconds and tracking data existing for each tenth of a second, there are on average around 55 "frames" of movement data per play. On each play the tracking data captures player movement data for all non-lineman offensive players (typically 6) and defensive players (typically 7+).

I filtered out pre-snap data and various small-sample edge cases (i.e. offensive players < 6, defensive players < 7, no football tracking data). I also excluded plays with a penalty to avoid noise being fed into the model when player movement doesn't necessarily align with pass play outcome (the EPA outcome in particular).

Tracking data was normalized from left to right (in terms of field direction). To improve CNN performance, each play was replicated with an inverted Y axis in training data (i.e. augmentation) under the assumption that mirrored plays will have identical outcomes. Data for model features was standardized.

To deal with variability in terms of number of defensive players with tracking data across plays (i.e. most commonly there is data for 7 defensive players, but it will vary anywhere from 7 to 11 depending on the play), I filtered to the 7 players furthest from the original line of scrimmage at the time of pass (or sack) as I assume those players are most responsible for pass coverage. I made this decision (instead of populating with zeros for example) to avoid introducing sampling bias if plays with tracking data for >7 defensive players happened to correlate with play outcome.

The structure of my CNN follows the success from the 2020 Big Data Bowl winning solution (which someone kindly replicated here). Each "image" (i.e. row of data) fed to the CNN represents a single "frame" from a given passing play. In total, the models were trained on ~2 million unique "images". Each image is transformed into the following vector features (6 offensive players x 7 defensive players x N features):

While not required to have a solid model, I also explored adding the following features to improve performance, particularly for the EPA/SR models where it is useful to have more situational context:

Models were trained on week's 1->16 with week 17 used as hold out data (for evaluation and analysis). Bagging was used to improve model performance with predictions averaged.

As noted, evaluation metrics are based on week 17 holdout data.

The INT model could be better (interceptions have a lot of randomness to them) but otherwise performance is not bad!

Note that these statistics are equally weighting each frame, which means plays that last longer represent a higher proportion of the total data. We can ensure longer plays aren't biasing our results by looking at performance at specific events (e.g. at snap, at time of throw) or across frame numbers (i.e. frame 1, frame 2, etc.) - the latter is done below.

As a play progress, we expect that the play outcome becomes more obvious (i.e. towards the end of a play, the ball location and closest player is very telling of the outcome). As expected, we can see model accuracy improves as time advances. 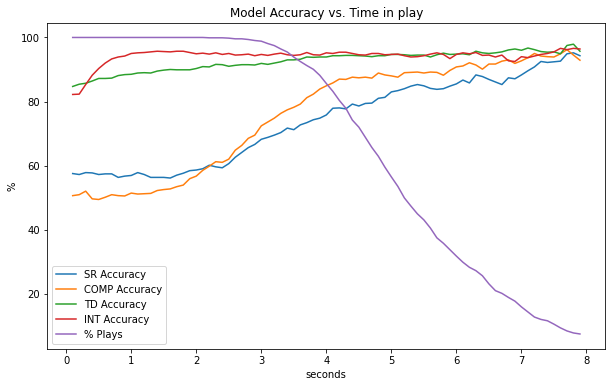 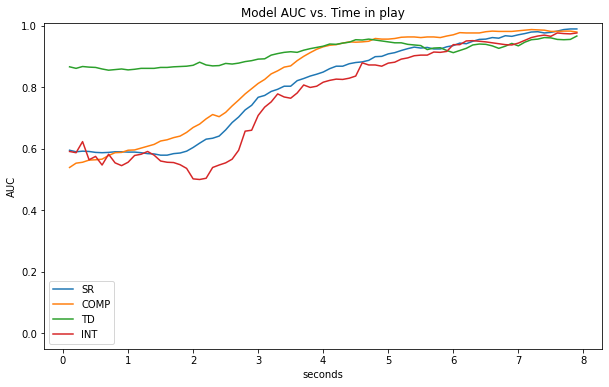 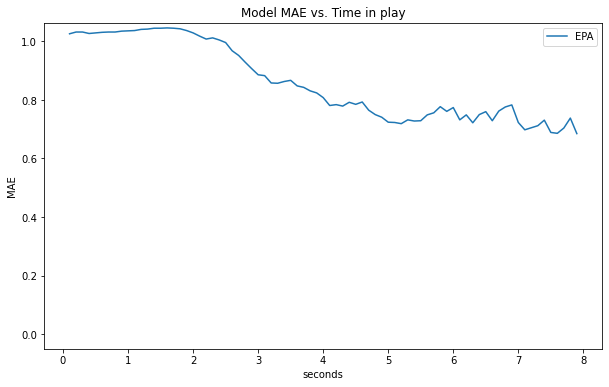 Below are various top plays from Week 17, which showcase how expected outcomes change in real-time as a play evolves.

In this play Russell Wilson steps outside of the pocket and throws a 37-yard dime to Lockett. After the ball is thrown the real-time EPA increases as the intended WR becomes known. Interestingly, the EPA drops for a few frames as the pass is going over the head of the Cardinals defender (#41) which is because the model doesn't know how high in the air the ball is (adding z-axis football coordinates can improve!). The plays ends with a predicted EPA of ~2.5 which is close to the actual EPA of 1.8 (watch the video).

On this 3rd down play we can see D.J. Moore is well covered by Marshon Lattimore all throughout, which translated to a low completion probability until the very end when Moore makes an amazing catch (watch the video).

Baker buys just enough time for Higgins to free up and then makes a strong throw under pressure to flip the success rate probability in the Brown's favor (watch the video).