Our new analytics draft board tool has gotten a lot of great feedback and I suggest you check it out if you haven't already. Upon seeing results from the handful of different analytical models, it makes you ask the question: How good are these models anyway? As the creator of one of these draft models, this is a question I have frequently asked of my own model. One subjective method for answering that question might be to eyeball out of sample results for well known draft stars/busts. However as an "analytics guy" I know we can do a lot better.

How to measure player success?

Before coming up with a way to compare models, one must first define what "success" for an individual draft pick means. Nowadays there are a plethora of single number metrics to rate players (RPM, SPM, WS , PER, BPM, VORP). Discussing the tradeoffs between them is worthy of a post of its own so I won't dive into that. In this post I will assume that there is a well agreed upon one number metric for comparing the success of different players. In my examples here I will be using Peak RPM as that well agreed upon success metric.

If players drafted in a particular year were sorted by Peak RPM, this would produce one opinion of an optimal draft ranking. Using that ranking, a simple approach to compare historical draft rankings might be to calculate the root mean squared error (RMSE) between the optimal ranking and out of sample historical rankings. Here is an example of this: 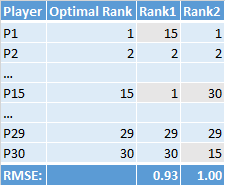 In this example, both Rank1 and Rank2 matched Optimal Rank except for a single miss (not realistic but using to prove a point). Rank1 missed on a selection by 14 slots whereas Rank2 missed by 15 slots. If you calculated RMSE for both of these rankings the value would be slightly worse for Rank22. However does this mean that Rank1 is a better ranking? Let's add Peak RPM to the same chart and see what it shows: 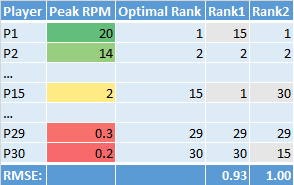 From this chart we see that the miss by Rank1 is much more important than the miss by Rank2. It is apparent that our simple method is not taking into account the differences in value between the players in a draft class - not all ranking misses are equivalent.

How about we define what is important to us in a historical draft ranking comparison method. Here are the requirements I came up with:

With a slight change to the simple method above we might be able to meet all of the defined requirements. Instead of calculating RMSE on the actual vs. expected draft slot ranks, we can instead transform the draft slot ranks into an expected player "success" value and calculate RMSE on that. This is best shown with an example:

If you can't tell from the example Ranking Expected Value is is calculated using the following formula:

This calculation can be done for all of the different players for a given ranking/year. Then we can calculate the RMSE between actual (Peak RPM) and expected (Ranking Expected Value) to come up with a total RMSE value for each ranking/year. An example of this is shown below:

Let's see if this methodology fulfills all of our requirements:

While there are many possible methods to compare historical draft rankings objectively3, this method seems suitable given our defined criteria. However if only looking at RMSE values there are some drawbacks4:

Before I share how to calculate our final metric (which is a slightly modified RMSE value), let me first define another value which will be used in its calculation:

Using RMSEWorst we are able to calculate a metric called "Draft Rank Value" (DRV). This metric is standardized meaning it will produce values between 0 and 100 (with the optimal ranking having a value of 100). It can also be compared across years regardless of draft class strength. The value is calculated using the following formula:

Now revisting our original question: How good are these models anyway?

Are they better than random? Better than NBA GMs? Better than Chad Ford? Using DRV we should be answer these questions objectively.

Coming soon will be a new tool here at tothemean which will allow you to answer these questions yourself.