In a previous post I gave a detailed summary on how I used machine learning to try predict long term value of NBA draftees. For anyone who read this I am sure they were left wondering what these models think about 2014 draftees. In this post and other upcoming ones I will be reviewing these models predictions for college players in the 2014 draft and offering some insight, observations, and predictions.

For most of this analysis I will be looking at the predictions which were generated via the models which were not aware of actual draft pick numbers. These didn't have as good of performance in correlating with long-term value compared to the models which did include actual draft pick. However I find it more interesting to see who stands out in these models because they are purely data driven and not influenced by scouts, GM's or humans in general just the pure data. Plus the draft information isn't available yet (as the draft hasn't happened) so I would prefer to not be biased by having to chose one of the many mock draft boards (although I do believe they would all result in very similar predictions).

If you look back in recent years for players who were not drafted in the top 10 but who have played well above their draft pick expectations you will see a lot of these guys actually had really good numbers across all of the top 3 of my models (SMO/LinearRegression/RandomForest). I'm talking about guys like Kawhi Leonard, Kenneth Faried, Isaiah Thomas and Jared Sullinger. All of these players were ranked in the top 15 (and much higher in most) in each of the 3 models in their college draft class. Here are the players in the last 3 draft classes who were not top 10 picks but whose ranks were top 15 across all three of the main models:

As you can see, this is a list of guys have way over exceeded NBA expectations based on their draft pick. The average draft pick rank (remember I don't have high school or international players data so I sort by draft pick to get this rank) of these guys was 18.36 while they average a PER performance rank of 11.91 in their draft class. We still need some more time on Kelly Olynyk, Shane Larkin, and Pierre Jackson (who scored 58 in a D-League game earlier this year) to know how they will turn out. Side note: the numbers love Pierre Jackson and I expect him to get a shot in the NBA at some point. Others like Alec Burks (went up from 17 to 28 MPG last year) and Tony Wroten (has the chance of a lifetime in Philly to prove himself) continue to show potential growth. Morris, Leonard, Faried, Sullinger, and IT all were solid starters for their team this last year and some of them might turn into cornerstones for their franchise if they keep it up.

Here are four predicted mid to late first round picks who fit this same criteria in 2014:

There are 4 players who fit this same criteria in 2014 (I will reveal the 4th one in a second). All of these players fail one of the many eye tests that scouts consider NBA potential: Anderson and Adams (athleticism) and Napier (height). However this sounds a lot like the previous list of players who have overcome their scouting reports and are starting to or are already having a lot of NBA success. Let me take a look at the scouting reports for some of these players (using Chad Ford's evaluations) and do some comparisons. Both Thomas and Napier are listed as "Undersized for his position". Sullinger was noted with "Has had conditioning issues" which sounds a lot like Adams: "Has struggled with conditioning issues in the past". You can even make a comparison between Anderson and Leonard in terms of quickness: "Lacks great lateral quickness"/"Lacks elite athleticism or quickness".

It sounds to me like the scouts are overvaluing the eye test for these things when the numbers are showing that the players can actually translate very well to the NBA. We have seen what Leonard can do guarding LeBron with his "weak lateral quickness" - after seeing comparison all I want to see is what Anderson can do on LeBron with his length!

One more thing which was interesting to me is that all of these players are from big time colleges and two of them are from UCLA. I wonder if there is something about the style of play at UCLA which attributes to scouts undervaluing these players when their numbers might say otherwise. I didn't explore this further.

Who will shock the NBA by transforming from Mr. Irrelevant into a valuable starter?

In the previous section I told you I was holding out one player from the list. The reason I am not listing this guy is because he is worthy of a whole section on his own. Remember when Isaiah Thomas (who showed up in the list above) slipped into the Mr. Irrelevant spot and has been proving the NBA wrong ever since? What if there was another player who fit the same criteria as above and will probably be lucky if he gets drafted as Mr. Irrelevant - would you draft him in that last spot? What if I told you the following information about him:

What about if his scouting report (Chad Ford's not mine) listed him as having the following attributes (among others)?

At this point I'm guessing you would say you would draft him in that 60th spot and maybe even consider spending your 30th pick on him! Well what if I told you his name was Aaron Craft!?

Here are his model ranks:

As you can see the models love him! He is top 10 in all 3. Based on my learnings from the prior blog post this is most definitely caused by his extraordinary steal numbers, high shooting percentages, and very strong win share numbers on both sides of the ball. The number one reason is undoubtedly the fact that he averaged 2.5 steals per game which led the Big Ten last season by nearly half a steal! Then why is he projected as a late second round pick at best?

His scouting report from nbadraft.net notes some of the following:

Doesn't this sound awfully familiar to the knocks on Jordan Adams, Kyle Anderson, Shabazz Napier, and their comparable NBA equivalents which I went over above?

The two knocks from Chad Ford are:

Both of these things are accounted for in the numbers model which ranks him as top 10 player. In reality the numbers aren't even that bad.

Craft's .333 college career 3PT% is better than IT’s college average of .325. Want to know what Thomas shot on 3's in his rookie season? .379. I'm not saying Craft and Thomas have comparable playing styles but without a doubt these two players show some strong similarities, they both: have made unforgettable big time clutch shots in college (IT being cold blooded, Craft advancing to sweet 16), have huge hearts, leave it all on the floor, will outwork anyone in the gym, they live to prove the doubters, and maybe someday they can both…be the Mr. Irrelevant who makes every other team wish they didn't pass on him.

When you look a little more in depth at the model rankings it is absurd how well Craft ranked. He was 4th overall in both the SMO and LR models and 9th in RF. Here is a table of every player since 1991 with ranks that high or higher in all 3 models: 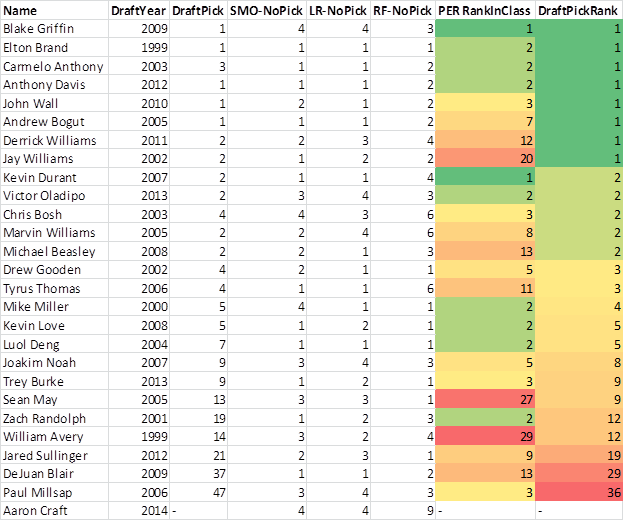 That is star filled list, there are definitely some busts but for every bust is an equivalent franchise player like Blake, Carmelo, The Brow, Durant, and Love. More than half of the guys who ranked this high consistently in all of these models were top 3 picks, so how is Craft lucky to get drafted!? The only three guys on this list who made it into the second round were DeJuan Blair and Paul Millsap who are looked at as absolute steals at their draft positions.

I wouldn't bet my franchise on Craft with a lottery pick but with all this data pointing towards his success in the NBA I don't see how you can pass on such an opportunity in the mid to late second round. When Craft is still on the board at pick 60 and the Spurs are on the clock, don't be surprised if in 5 years we are all talking about the amazing ability of the Spurs to find hidden gems with the likes of Manu Ginobili, Tony Parker, Tiago Splitter, George Hill, DeJuan Blair, Kawhi Leonard, and…Aaron Craft.