After doing quite well in the first week of madness let's see how we did in the sweet 16. This post will be a quick recap of my sweet 16 picks.

Let me start by saying I'm just glad I didn't have Utah. Even without that brutal pick, things didn't go quite as well in the sweet 16. Check out the graph below of point spread in the Wisconsin vs. UNC below - that was quite the turnaround by the Badgers…I thought I was in the money for sure until the final 2 minutes. This goes to show you how unpredictable March basketball is. 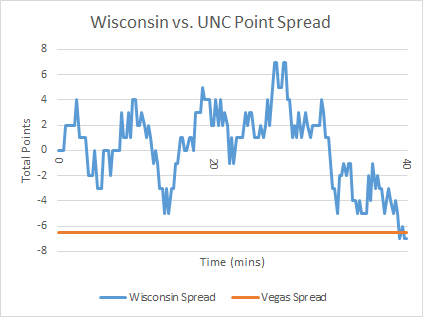 Here are some more observations:

Next up: Elite 8 picks