With the fire that they will be raining upon their enemies in the coming season, it may seem apt to compare the 2016-2017 Warriors to Daenerys Stormborn and her quest to reclaim her throne. However, a different set of Game of Thrones characters is far more fitting… 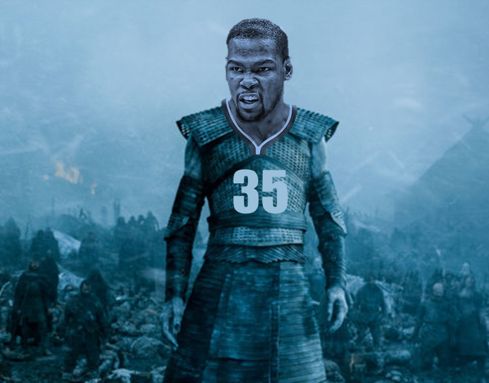 Despite going down 3-1 in the Conference Finals, the Warriors were resurrected by Klay's magic in Game 6, and officially put the arrow through the eye of the Thunder on May 30th. After losing a key battle (the Finals), they have regrouped and set their sights on winning the Great War to come.

By killing and assimilating Kevin Durant into their Dead Army, they've shifted the odds so far in their favor that some fans & analysts lament that every other team might as well pack it in and go home. Instead, the Ringer has suggested that we unite the powers of Westeros against them…

While it's a fun exercise to go through and handpick players to take on this monster, why not approach this analytically and (as Daryl Morey is always accused) assemble a team strictly based on the numbers? Other than some basic constraints to create a viable team, let's ignore role, chemistry, and all other facets of a successful NBA team to maximize things like Real Plus-Minus (ORPM & DRPM) and RPM Wins. Let's see where this gets us.

As much as I would have enjoyed manually plugging away at each and every combination to find the right mix, I instead enlisted the help of trusty Microsoft Excel (dropping in ESPN's RPM metrics for the Top 100 players) and Oracle's Crystal Ball software. This allowed me to set up "optimization runs" to test each and every combination of players to find the five that maximized each metric (RPM, ORPM, DRPM, Wins) with the following constraints:

The second constraint is included to ensure we don't end up with a team befitting Jon Bois' excellent Breaking Madden or NBA Y2K series. Even Morey-ball has its limits.

Before diving into the results, let's first size up the enemy.

Yikes. +27.42 in RPM, with nearly 74 Wins predicted for this group. Something tells me this team costs more than $15. Regardless, let's put together some challengers.

Well balanced team offensively & defensively (achieving a +7.04 RPM, but with -4.13 WINS). Something tells me that Duncan won't be able to defend the Warriors' pick-and-rolls, and as dogged as Lowry & Paul can be on defense, they are far too small to guard Klay.

Final Verdict: Warriors run the bigs off the court, and shoot over the top of the smalls.

The experiment goes even more awry. Despite being within half a "WIN" (with a superior +4.54 RPM), I doubt this 3 PG lineup could quell the Warriors shooting onslaught. Even if Westbrook would relish the chance to guard KD, it doesn't seem like a winning strategy.

Final Verdict: Height wins again as Klay and KD shoot over the top of their diminutive defenders.

For this run, I placed a limit on the number of PG's and C's that could end up in our lineup. This should help us construct more feasible lineups to combat Golden State's height.

LeBron arrives on the scene, and with him brings another member of Team Banana boat to help orchestrate the offense, and decent shooters at each position. This group produces a better RPM (+4.58) but far less WINS (-14.22).

Final Verdict: LeBron & Paul are a formidable duo, but Manu tires chasing Klay around screens and Frye can't stay in front of Iggy as he blows by and creates deadly 5-on-4's.

Pau feels like the weak link on defense, as I doubt he could stick with Draymond or Iggy and wouldn't survive being switched onto Steph or KD.

Final Verdict: Pau is put in a blender, play after play, after play.

Focusing on building a defensive stalwart sees LeBron and KG join up for the Spurs and Duncan for one last ride. Would be a good "we're too old for this shit" buddy comedy if Duncan didn't hate KG's guts (and for possibly for good reason). The lineup produces a slightly better RPM (+0.94), but much lower WINS (-17.84) than the Warriors squad. Seems doubtful it could put up enough points to contend.

Final Verdict: Turns out Duncan & Garnett are definitely too old to play pick-and-roll defense against the Warriors' playmakers.

Who needs defense, anyways? This lineup tries to fight fire with fire, pitting KD's old superstar teammates against his new ones, and borrowing a couple Cavs to round out their shooting. It's combined ORPM actually surpasses that of the Warriors by +0.22, but Jokic provides the only lick of defense in this lineup. Overall, it produces 24.92 RPM (-2.5) and 63.49 WINS (-10.41).

Final Verdict: Defensive mistakes plague this group, as Curry, Klay, and Durant use the team's laziness (Harden), overzealousness (Westbrook), inattention to detail (JR), and slow-footedness (Love) against them.

Now, let's take a similar approach (maximizing ORPM), but this time not allow the optimization to choose negative DRPM Players. That way we can avoid plays like these.

This lineup pairs LeBron with new Thunder teammates Westbrook & Oladipo, includes Marvin Williams as a versatile 3&D Wing, and adds Jokic for rim protection. While the offensive rating is high here, it seems like fool's gold, since LeBron, Westbrook, and Oladipo all thrive with the ball in their hands, and don't shoot it particularly well. It produces a superior RPM (+1.51) but 5.78 less WINS.

**Final Verdict: Despite high offensive ratings, a poor mix of skillsets and lack of shooting dooms this team.''

This optimization focuses on shoring up the defense, but limits the set of players to those with positive offensive impacts. LeBron makes a run at it with two 3&D Spurs, Jokic, and Amir Johnson. Their collective RPM is higher than the Warriors group (+2.67), but produces 10.44 less WINS.

Despite Excel's best efforts, this war cannot be won in a spreadsheet. Many lineups produced a higher RPM than the Warriors' extinction lineup (+2.27 on average), but none reached its total WINS (-8.45 on average). The closest contender got within half a WIN, but featured 3 PGs and no LeBron1.

Turns out that $15 is not nearly enough to create a team that can compete with this Warriors team. Now, we can only hope that the cap won't jump again, allowing them to absorb more high-priced soldiers into their Dead Army.