You have inspired husky fans

You have inspired your teammates (Final Four!)

You have inspired my (not yet 2 year old) daughter ("let's watch basketball game, daddy!")

Kelsey Plum - You have inspired me.

Your style of play has given me a newfound appreciation for woman's basketball. I agree with the James Harden comparisons, I would not be surprised if you are a better shooter than Markelle Fultz, and I am not the first to recognize your greatness.

What an accomplishment @Kelseyplum10. You are truly a #SchwaagChamp pic.twitter.com/gEWgZ5wIzB

After seeing you break the all-time scoring record by scoring 57 points in the most absurd performances ever, I knew you were the GOAT. Being a Husky fan as well as an analytics guy, I needed to know how much of my Kelsey Plum admiration is due to subjective Husky bias vs. objective numbers.

With no known public draft model out there for the WNBA (while numerous exist for the NBA), I knew that I would need to create my own WNBA draft model to fully understand your level of greatness. To show others just how great you are, I am publishing projections to our draft board tool) and obviously I had to name it after you.

PLUM - a draft model to objectively predict the potential of future WNBA draftees.

The PLUM WNBA draft model is based off of my "Longevity" NBA draft model (which you can read about here). The PLUM model follows the same philosophy (combine machine learning with as much data as possible to objectively predict the future performance of players).

In particular, the PLUM model uses individual college game log data (since 2010) to measure skill and project potential while accounting for measurables (age, height), efficiency (minutes), level of competition, pace, etc. Any notable differences from the NBA draft model will be from a lack of data in areas such as athletic ability (combine data) and scouting (high school ranks)1.

Since I don't have a lot of other draft models to compare it to, I am releasing several additional model projections (all star probability, drafted probability, etc) alongside PLUM to our WNBA draft board tool.

To give a sense of the accuracy of the model, here are the top 15 players as rated by PLUM using out-of-sample historical projections2 on college players since 2010: 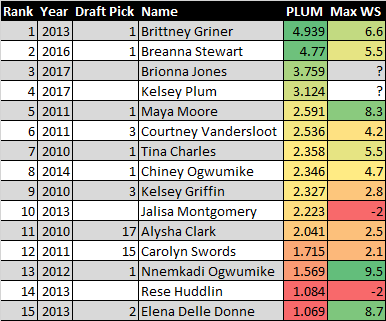 As you can see Kelsey Plum is at the top of the list with a bunch of great players (and another future star in Brionna Jones).