The PLUM draft model (named after Kelsey Plum) utilizes machine learning to objectively predict which players will succeed in the WNBA.

The biggest strength of the PLUM model is that it incorporates advanced statistics derived from college play-by-play data which are not available anywhere else (RAPM, "Adjusted" box score stats, etc.).

These statistics isolate the impact and efficiency of a single player by controlling for playing time, pace, other players on the court (opponents, teammates), etc. The model also uses player characteristics (year in school, height).

PLUM is a gradient boosting quantile regression model which predicts a players WNBA peak single season win shares. By using quantile regression, we can evaluate predictions across quantiles, highlighting differences in risk and upside. By putting less emphasis on a single number, and more emphasis on the range of outcomes, our evaluation of players can be more representative of the roll of the dice that WNBA teams actually face.

While I encourage you to focus on the full spectrum of PLUM outcomes, I realize there are times when a single number is unavoidable (i.e. draft board rank). Therefore, a single number interpretation of PLUM is calculated by averaging p50, p75, and p90 values, which emphasizes the importance of star players.

Across multiple seasons, PLUM is calculated by taking a minute weighted average of the players most recent two seasons, which balances incorporating more data without over-penalizing players who showed growth throughout their college career1. I've also included results from a STAR classification model, which predicts the probability of being a WNBA All Star. 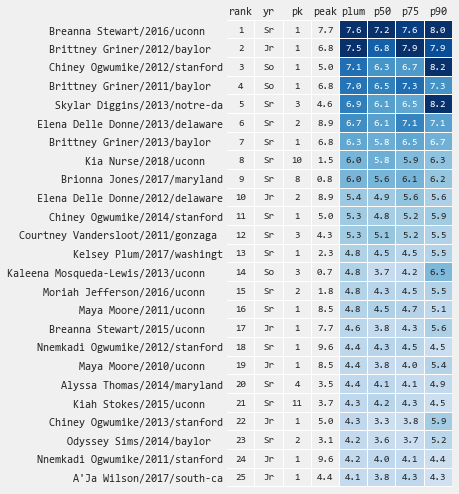 While the model has room for improvement, the (out of sample) results below show that, in general, it performs quite well.

Below are the Top 36 players - an extended view can be found here. 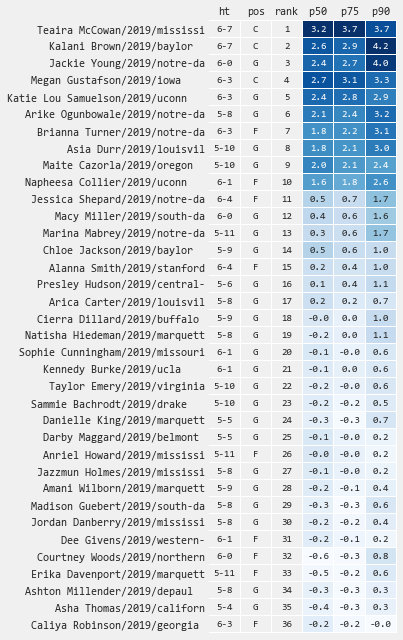 Below are the top Guards - a statistical profile view can be found here.

Below are the top Bigs - a statistical profile view can be found here.

Below are players with a >=2% WNBA All Star probability. 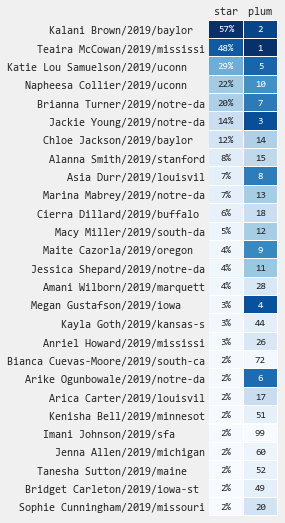 Select a player to see their draft profile:

Below are the actual draft picks compared with PLUM. 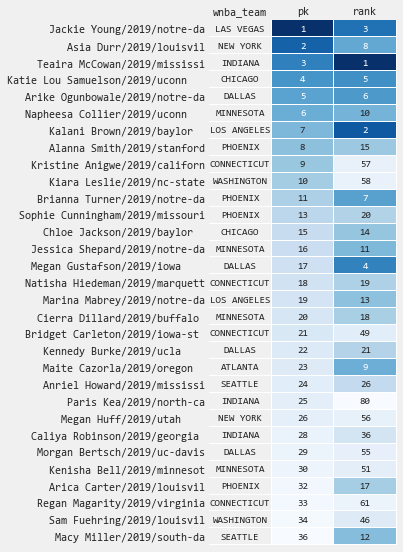